The commotion prior to the Bezalel Academy of Art Graduate Exhibition for the art, fashion and goldsmithing tracks was palpable. Some signs still had not been hung, and the printed materials were late because Bezalel insisted that all texts be available in Hebrew and Arabic. The large exhibition space housed incredible works by a small number of students, meaning that every piece could receive the attention due it. The excellence and vision of the works compensated for their relatively small number.

Noam Merom-Hoch: I cannot properly convey the sense of this project, which was composed of a personal journey and diagrams burned onto one fabric that was painstakingly glued onto a base fabric in a perfectly matched contrasting color. Pictures cannot do justice to the works and their incredible details; you can only clearly see the specific elements if you peer closely at them. 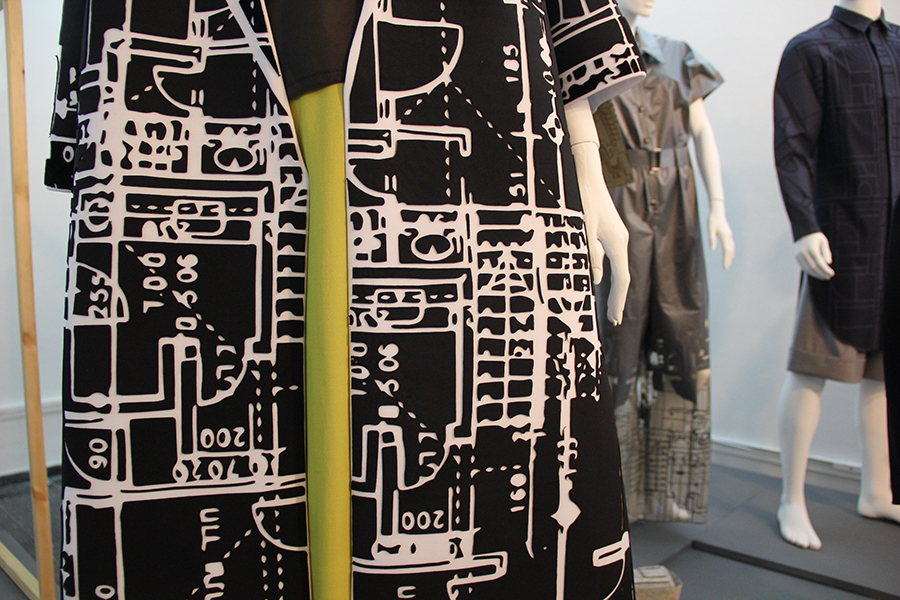 The official press tour continued to the principal departments. I quietly slipped off to where I feel most at home: to the laborious works in textiles, jewelry and fashion created by my future colleagues.

The 25,250K of the title refers to the 25,250,000 plastic labels that Michal manually attached to each other. Her love of shopping, hoarding and collecting of nearly everything, preferably cheaply and in large quantities, led her to examine the fashion industry and its cynical exploitation of workers and consumers. Michal transformed herself into a worker in mass-production who attaches the tiny plastic ties to tags on jewelry and clothing. 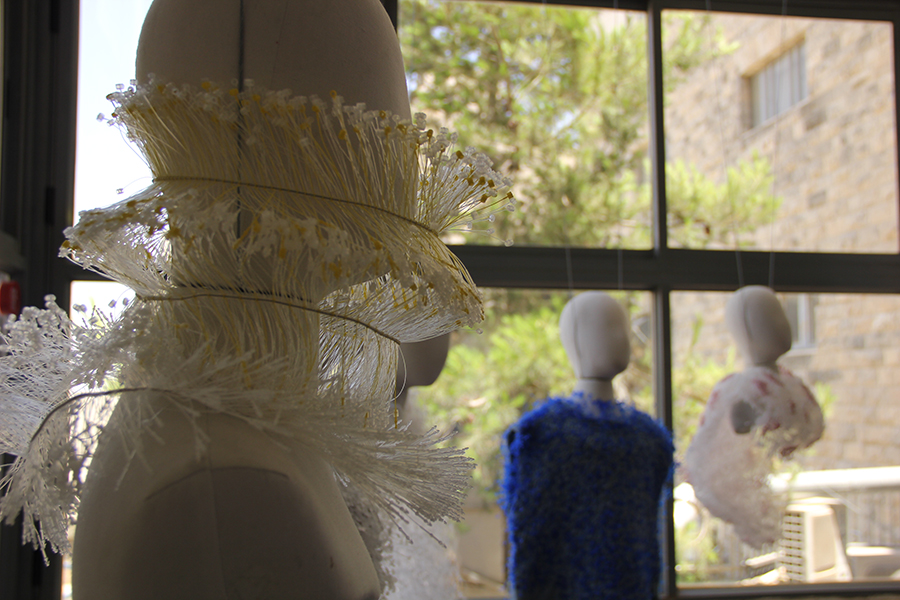 I believe that the connection between jewelry and fashion permits a dialogue between different media and self-critique of each.

The text of Marwa Abo Asbi touched me. She talked about being a third generation following the Nakba [translator’s note: “the Catastrophe”, the Arabic name for the expulsion of Arabs from their homes during the 1948 war that led to the founding of Israel].” Abo Asbi’s project presents a collection of her parents’ childhood memories from Jatt, their village that was captured by Israeli forces in 1948. 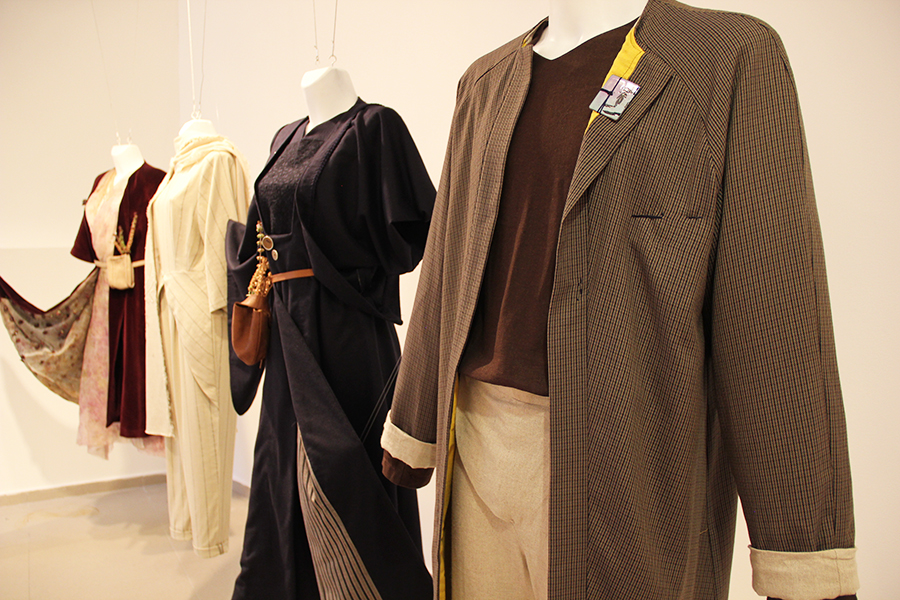 Reut Alon fascinated me with hats made in the traditional manner but from materials that come from street art. 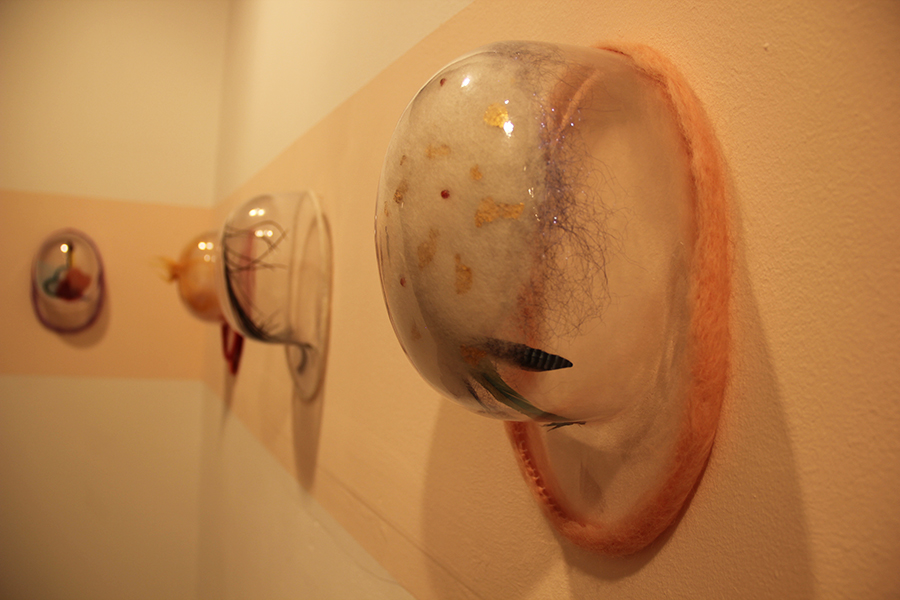 Roni Burnovski created a series of masks that provide reflections on courting rituals, on communication and romantic dynamics, and on how people manipulate themselves to match their identities to circumstances. Her excellent work is a sculptural game on the body. 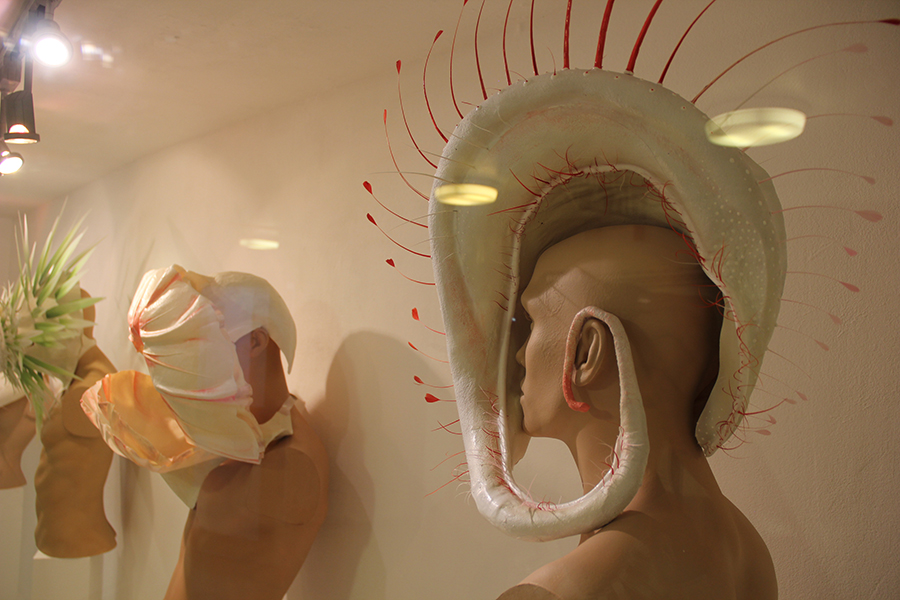 Karin Muncher combines textile, technology and goldsmith with the world of glass. 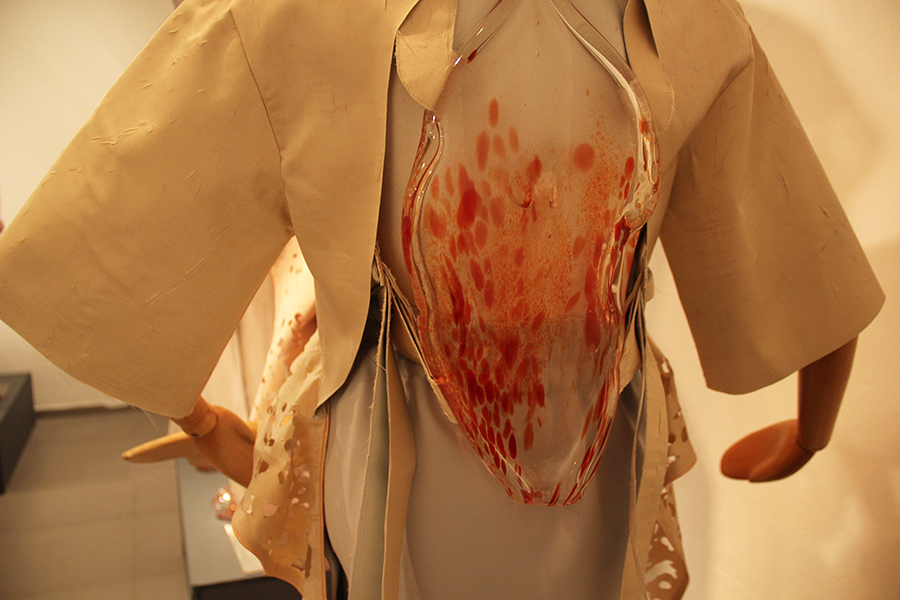 Gal Souva creates shoes inspired by the courtship rituals of birds-of-paradise. The extremely high-heeled shoes for women are a wink at contemporary dating rituals.

Zohar Fadlon has created a collection of bags using a home FDM 3D printer. The works combine her goldsmith expertise with plastic printing techniques to create a rug for use in textiles.

Sabina Kogan forms small worlds inspired by the visual world of Hayao Miyazaki. Miyazaki, a Japanese filmmaker and animator, creates exceptional natural environments juxtaposed to unusual phenomena in his films. Sabina creates unusual and astounding lichens for the face to be used as non-traditional accessories.

The connection and interaction between different worlds were expressed in almost every project I examined. Clearly, Bezalel students are exposed to a rich variety of media and their teacher’s support and encourage them to combine and challenge themselves with different media in their finished designs.

The sensitive curation by Omri Goren gives viewers the opportunity to study each project deeply. It is almost as though each project, each in its own niche, is in its natural environment.

Omer Saig delved into the meeting point between accessories, clothing and the body. The leather is sewn perfectly and the bags are made of wood with clean and precise cuts. 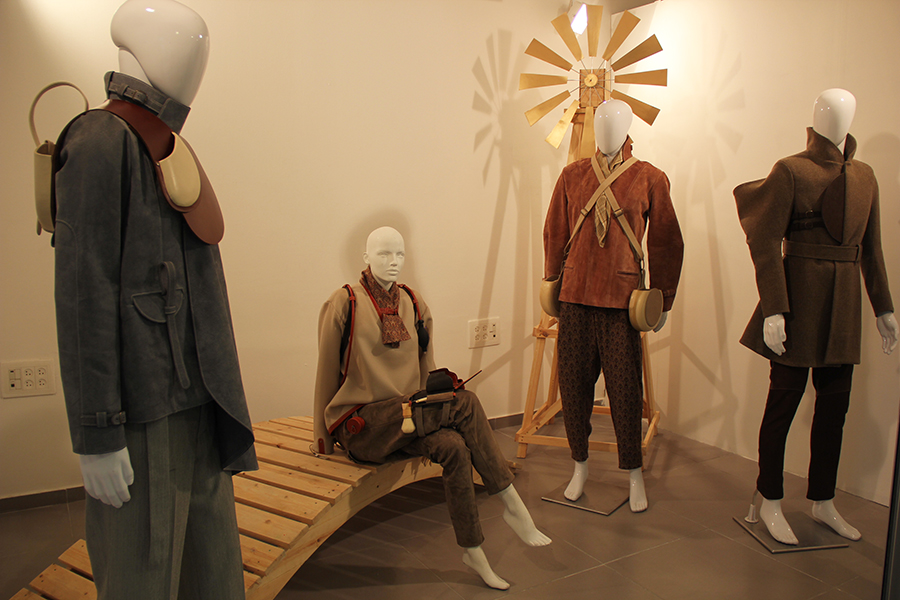 Due to my limited time, I thought I should quickly visit the cafeteria for a coffee before heading home. A wrong turn led me straight into the art department. The students there feverishly preparing for the exhibition knew that the tour in the building was supposed to bypass them.

I ascended to an extremely pink room and Free’da Nipple jumped out at me. She is Gil Goldschmidt, a woman who becomes a man to reconnect herself with femininity. I still can hardly figure out if she is a man or a woman. She showed me how she makes perfume from oil and homegrown mint. There is no doubt that personality can be an art project in and of itself. 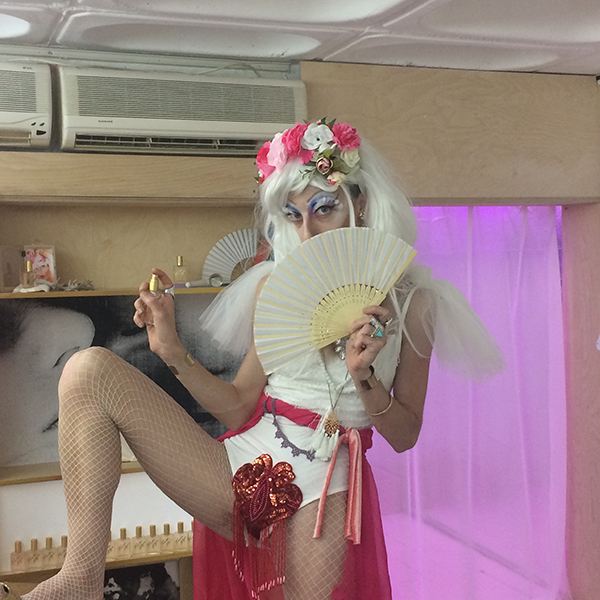 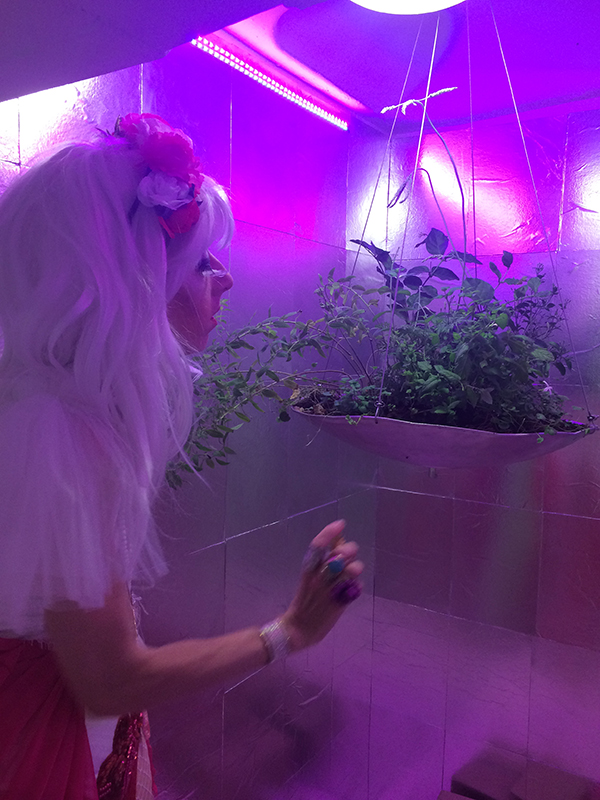 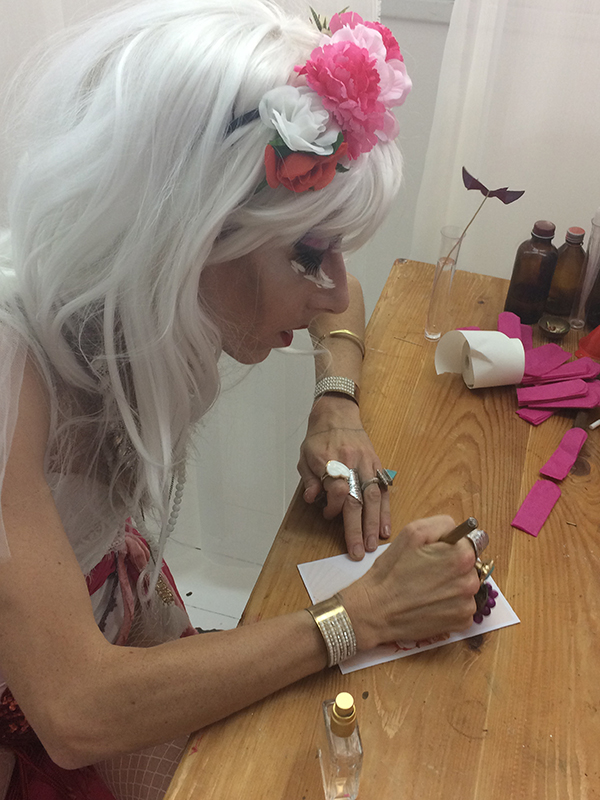 In a side room, I encountered huge wooden structures. Two animated students followed me in, as if by accident, and began to play with the buildings to draw my attention to them. The room moved and changed shape. Anat Keinan created the sculpture buildings with a non-architectural and intangible utility that cannot be designated as a definite place. Visitors to the exhibition are invited to enter the sculpture buildings, to walk around them and even to move them by pushing their walls, which are on visible wheels and tracks. 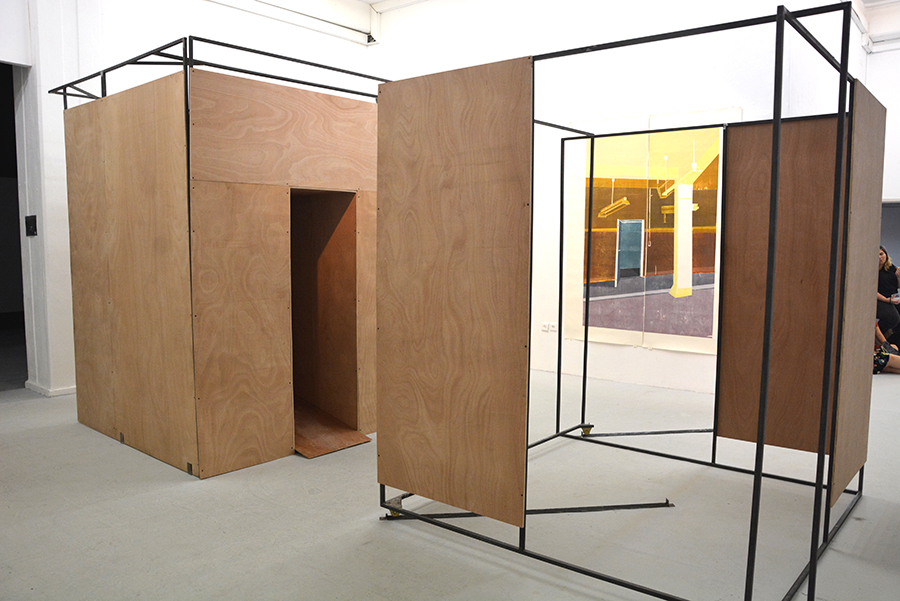 Or Ariely drew me to his work with a touching fragility. He uses different techniques to combine digital media and human touch. The works examine the status of the privacy in the digital age and the isolation reflected in the virtual-public dimension. In his work, he refers to disruptive culture, placing signs in an indeterminate language or a personal document in a public place. I could not help thinking that we all place personal things in public spaces and perhaps disruption has become the norm.

I know now that next year I must arrive at the exhibition earlier so I’ll have more time to see all the works. I will also know to come armed with an extra battery for my camera.