Trending
You are at:Home»Art»All that is Gold does not Glitter

if I would tell you that I have an offer that can add about 2300$ to your annual salary, would you check this out? sound like a dream, right, but apparently, in Israel, those are the numbers of food that an average family is throwing away every year, from a misunderstanding of expiry dates till buying sales and promotion that we don’t really need, eat or use.

The Natural Step Israel (Public Benefit Company) that works to promote systemic changes in Israel, using the Sustainability Transition Lab model, discovered those numbers when they decided to focus on the food sector in Israel, in their goal to specifically reduction of food waste.

they were debating between food or fashion sectors as their first working goal, personally, I find those two sectors very similar in terms of customers behavior and I will not be surprised if the numbers of fast fashion consumption are the same as food overconsumption numbers.

On Tuesday, September 5, a special feast was held at the Kandinof House in Jaffa. The invitees, who had received only a mysterious invitation for Mass- Not all that Glitters is Gold – an evening that combines art, food, and sustainability, were surprised to find a table about eight meters long, covered with nothing but a black cloth.

150 guest from the food industry in Israel were gathered slowly at the entrance and from the whispers, in the crowd, I realized that I wasn’t the only one who fails to know what exactly I’m invited for.

The confectioner Adi Kehan, offered another visual treat. Apples were coated in sweet hot dressing and dipped in edible gold powder, left sparkling traces on the tasters’ lips and hands. 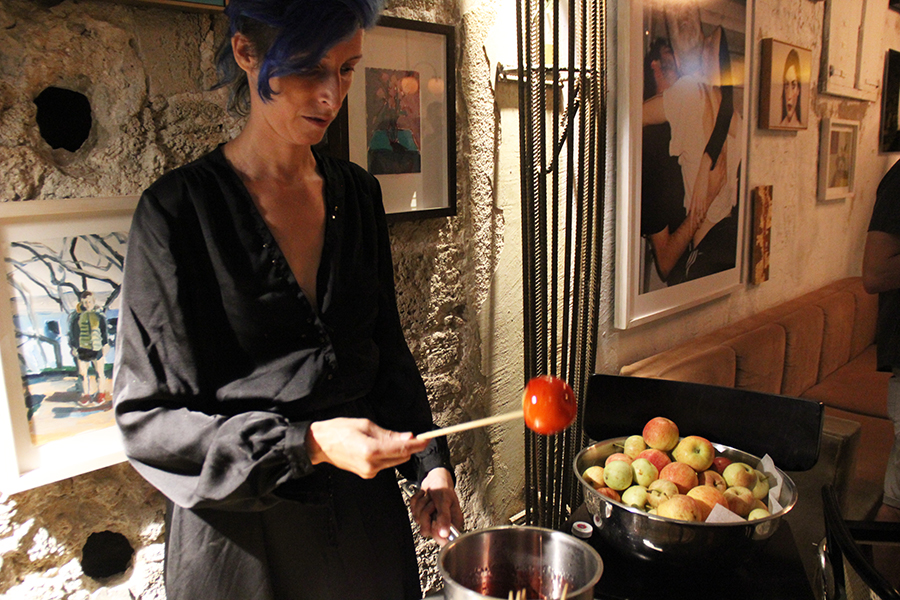 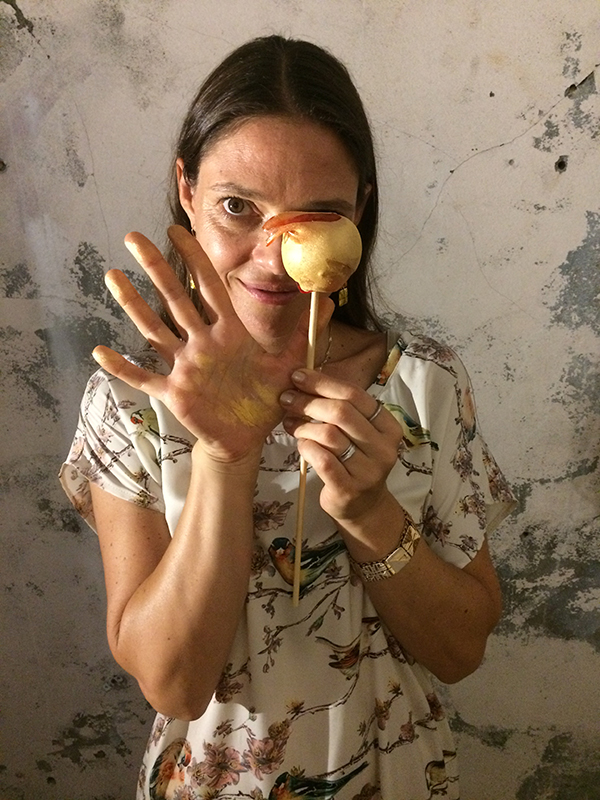 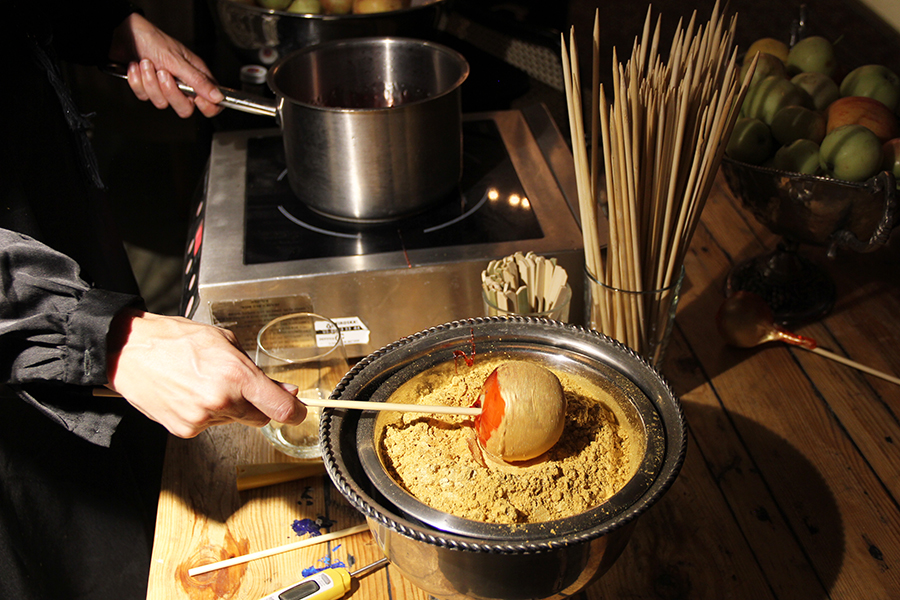 About half an hour later, waiters dressed in black with white gloves came out of the kitchen and began to place works of art that corresponded with food, along with rich dishes created by Chef Orel Kimhi of the Popina restaurant. most of the ingredients come from fruits and vegetables that were an aim for trash at the wholesale food main market (for being ugly vegetables). Slowly, the naked table became a celebration of abundance, bursting with colorful, deceptive elements. 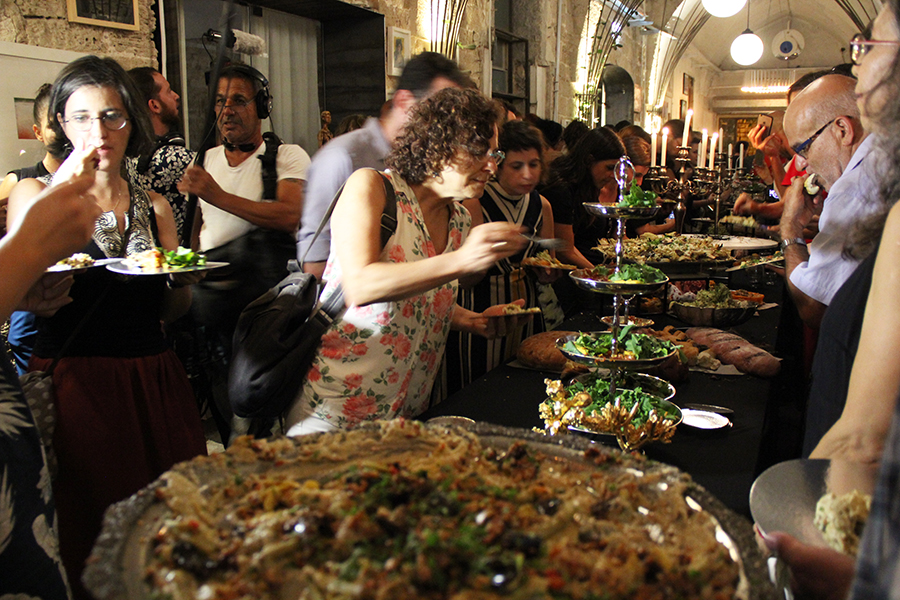 Next, to dishes such as crispy polenta with tomatoes, camembert focaccia and baked pumpkins filled with fried zucchini with cheese and a pinch of truffles, artworks were served to the table as well. Some of the artworks were disguised as food and confused the invitees. Roni Landa’s “cabbage”, its leaves made of slices of fake meat, was presented next to other “fruits” that appeared rotten and they’re interior revealed red, moist fake meat. Racheli Sharfstein’s “Sausages”, were made of scraps of different materials with which Sherpstein works, wrapped in sausage sleeves. Kobi Siboni’s Thanksgiving Turkey was made of iron strings and had no actual meat on the metal skeleton, and Lee Rosenthal’s cacti were coated with pure gold. 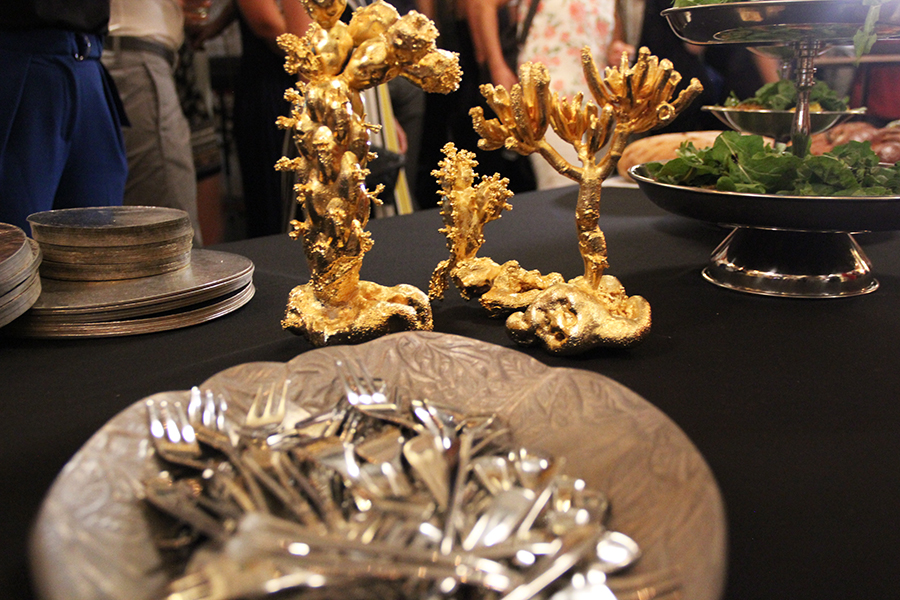 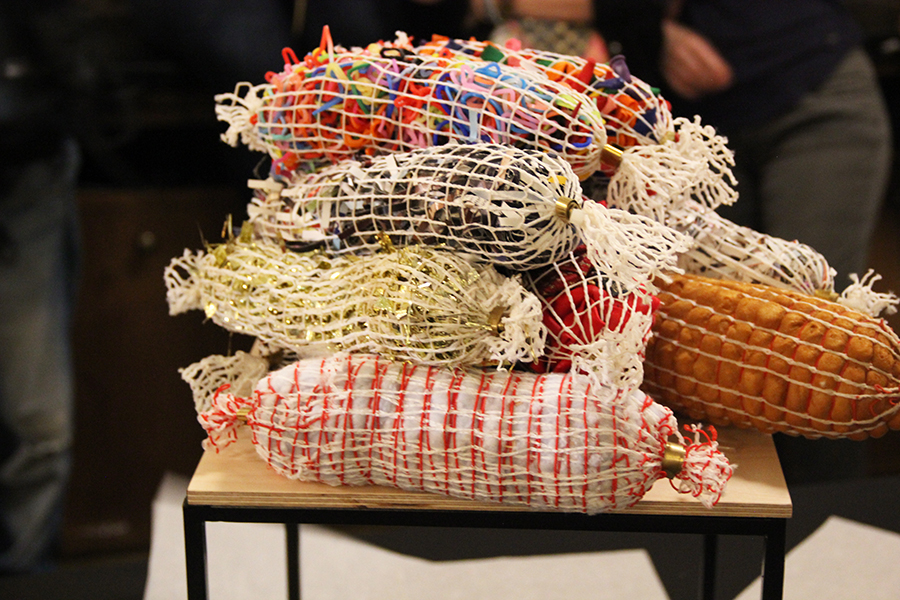 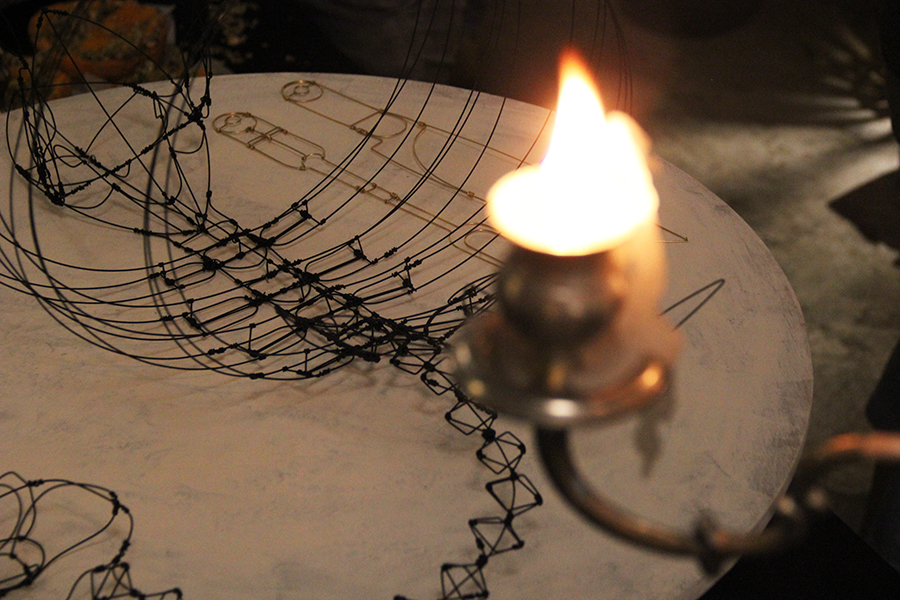 The apples, like all other vegetables and fruits used at the event, were salvaged from being disposed of. They were completely safe and good to use, except they failed the strict beauty standards of the food market. About 300 Kg of fresh produce that had been disqualified for sale were collected for the event – but tons of edible food is still lost daily, in Israel and around the world, because of small or oversized dimensions, unusual appearance or excess supply in the market. 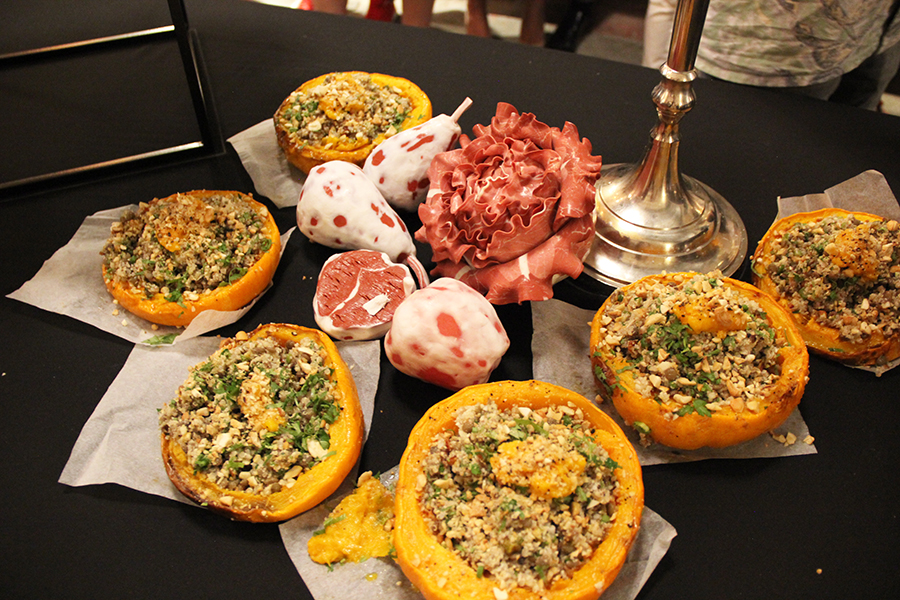 Mass evening aims to raise questions about the abundance of food in our world today. Is it real? What values are linked to it? What is the price we pay for the ideal of beauty in the food industry?

we all desire for luxury and prosperity, a variety of products to use, bigger plates in restaurants, there are many things that we are designed to think of as a “good life” atmosphere, which raises the questions, are those things really bring us happiness? what is the real price that we need to pay for them? did we agree to pay that real price? prosperity also means comfort, does all those things still make us comfort?

in most cases the final customer can not really go to the wholesale market, we do not get the choice to say, Yes, we want ugly fruit, or Yes we want to pay less and get ugly fruit, or should I say feed family in need instead of throwing it away as useless garbage.

and let’s face the facts, companies are interesting to sell us more and in higher prices, which sometimes lead to waste of food. but the good news is that food companies today are starting to care, they want to build their trust with their customers again which makes the perfect gap for  TNS Israel to step in and works to promote systemic changes in Israel, using the Sustainability Transition Lab model. with over 40 organizations are partners in the Lab, including governmental ministries, local municipalities, food producers, retailers, the IDF, academic institutions and other professional bodies. to work toward finding and a breakthrough solution for #zerowaste food. 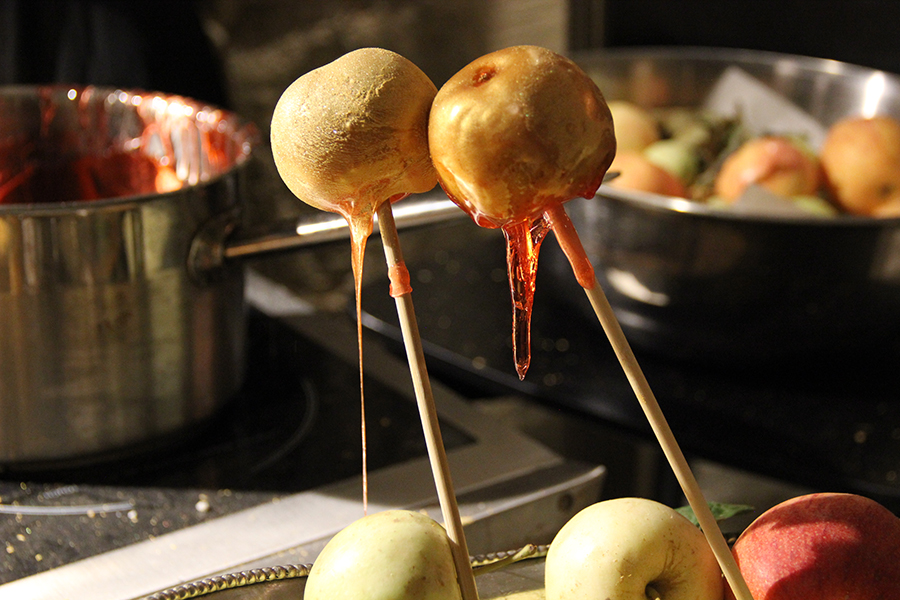